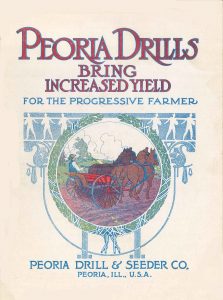 he Peoria Drill & Seeder Company was one of the most important partnerships the Rock Island Plow Company maintained. The two companies did extensive cross advertising and Peoria reps frequently manned RIPC displays at trade shows, though RIPC did not have an exclusive contract with Peoria. My research is now indicating RIPC may have had a financial stake in Peoria Drill & Seeder, but so far I do not have hard evidence of it. I do have confirmation RIPC did have a stake in the Peoria Malleable Castings Company of Peoria IL which was directly tied to the seeder company.

The Peoria Malleable Castings Company was established in 1917 by Luther E Roby,  George T Page and Gerald H Page with a capitol stock of $175,000 to supply castings that Peoria Drill & Seeder was having trouble obtaining. It appears RIPC also provided capitol to the company as they carried shares of the company. Roby had been one of the founders of Peoria Drill  & Seeder in 1904 and was now treasurer and superintendent of the Peoria Drill & Seeder Co, and George Page was an employee there. 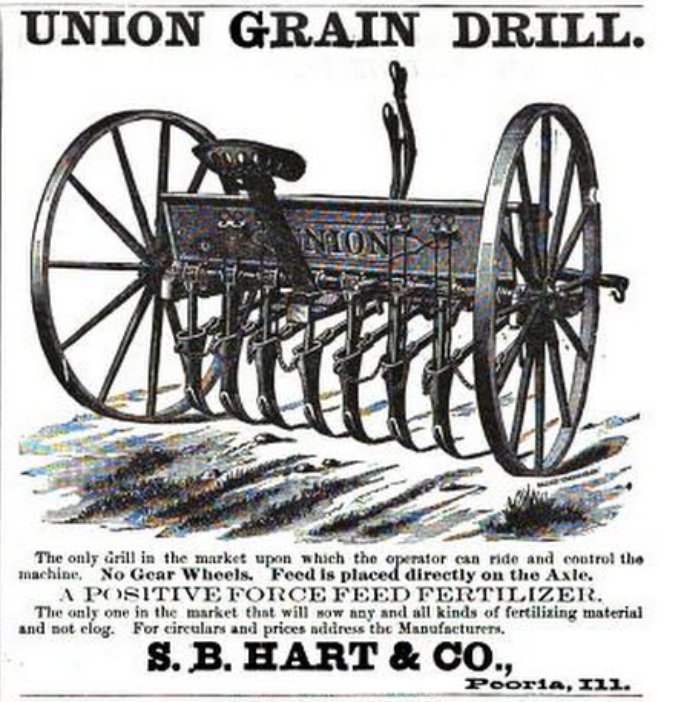 In 1878 Stacy B Hart left the James Selby Co of Peoria IL (Hart had started work in Selby’s factory at the age of 16 in 1863) to start a new company in partnership with Frank Hitchcock to manufacture a grain drill of Harts own design. In 1879 manufacture began by the S.B. Hart & Co Company at a small shop on Washington Street, just west of Oak in Peoria. In 1880, the company moved to the corner of Washington and Chestnut Streets, into the building known as the Voris foundry, which was destroyed by fire in 1881. Insurance covered $16,000 for the machinery and building and another $2,000 in destroyed stock. Oddly enough, Hart named his drills “Union”, which was the name his former employer James Selby used for his corn planters.

After the fire, the company was incorporated as Hart, Hitchcock & Co., with capital of $105,000. The officers were Frank Hitchcock, President; S. B. Hart, Vice-President and Manager; and Alban B. Fink, Secretary and Treasurer. The company manufactured grain-drills, broad-cast seeders, stalk cutters, sulky hayrakes, hay stackers and sweep rakes.

In 1885 another fire destroyed the factory and Hart, Hitchcock & Co sold out to Harts former boss, James Selby of the James Selby Co and the Union Corn Planter Works & Company. Selby had settled in Peoria in 1857 when he started the company and had been building the Union Corn Planter. After leaving the company, Hart concentrated on building the Hart Grain Weighers and ran the Hart Grain Weigher Company until his death. 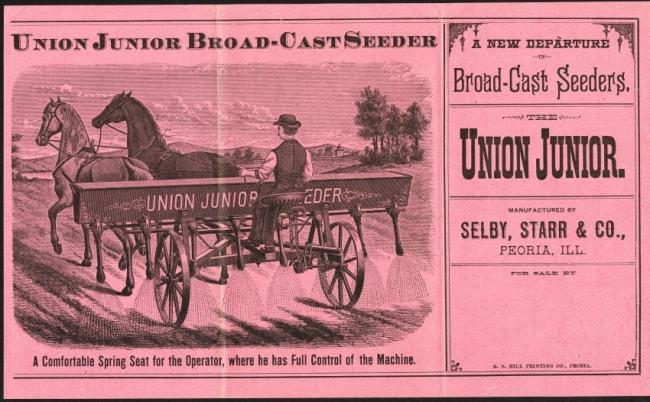 The new company was reorganized as co-partnership named Selby, Starr & Company between Selby and Julius S Starr, with Alban B Fink remaining as secretary. Starr provided half of the $75,000 in capitol for the company. The new company expanded the implement line and employed 100-125 men at a time. A fire in 1892 started by a worker knocking over a match and lighting paint on fire destroyed the factory but spared the warehouse of finished products. Damages were estimated at $80,000, but were fully insured and little production was lost as manufacture moved to Selby’s planter works while the factory was rebuilt.

In 1898, Starr bought out Selby and Fink when Selby decided to retire from both companies. Starr was born in 1833in Sullivan County, NY. After moving to Ohio at the age of 3, his father died soon after and the family was left hard pressed to survive and Starr mostly saw to his own education. In 1849 at the age of 16, Starr moved to Peoria and took up working on a farm and while also working to expand his education. His perseverance was note by local lawyers and he was offered a chance to “read law” with Col P Davidson and Judge Williamson of Peoria. Starr was admitted to the bar in I862. Starr would practice law and be highly active in politics until retiring from law in 1888 to focus on the company.

Starr would continue to run the company until 1904 when a sale was arranged, and in 1905 when the company was sold and reincorporated as the Peoria Drill & Seeder Company. The new company organized with a capital of $125,000 and the immediate plan was to increase the factory and double output. The officers were president Weston Arnold, Clarence A Pattison as secretary and L E Roby as treasurer. Pattison would file a number of patents under the Peoria Drill & Seeder name.

The Peoria Drill and Seeder line would stay very focused on seeding and fertilizer. The 1909 catalog listed the following:

The New Peoria – A disc drill fitted with double run feeds with no fertilizer attachment. 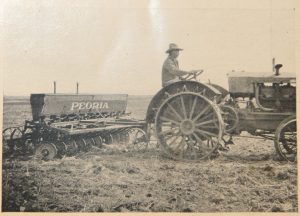 In 1913, the Rock Island Plow Company announced all its branch houses would carry Peoria Drills and Seeders which replaced Rock Islands own limited line of disk seeder attachments. This gave Peoria a nation wide market through Rock Islands dealer network, but the deal was also not exclusive. A lot of Peoria material after the deal still was marked only with the Peoria name, nor did Peoria make a point of using Rock Island tractors fully in its advertising. This was especially true when the Fordson hit the market, Peoria wasted little time in marketing to Fordson owners.

By the time Rock Island started selling Peoria products, The Hercules had replaced the Cyclone. This was advertised as the largest seeder made.

By the mid to late 1920’s the line had settled into the following:

Peoria- A disc drill fitted with fluted feeds with no fertilizer attachment.

The New Peoria – A disc drill fitted with double run feeds with no fertilizer attachment.

Peoria Union – A disc drill with the double run feed that could take a fertilizer attachment.

Peoria Union Combined – A disc drill with the double run feed with a factory fertilizer attachment.

Peoria Plow Drill – a 6 or 7 disc drill modified to tow behind a plow.

In 1930 Peoria Drill & Seeder merged with the Vulcan Plow Co, Hayes Pump and Planter Company, and the Roderick Lean Co to form Farm Tools Inc, based in Mansfield, Ohio. Farm Tools, Inc continued to sell products under these names through the 40’s and into the 50’s. Their biggest dealer was the Ford Fergeson Dearborn network and in 1947, Farm Tools, Inc made an official agreement to provide implements under the Dearborn name.