In all but a couple of rare cases, the Rock Island tractor was painted medium dark grey with red wheels and radiator only with gold and red badging. Many Rock Island restorations tend to use much lighter shades of grey and excessive amounts of red than the original. The old Dulex Gray number 93-6334 is out of production. This is the number Dick Bockwoldt came up with from working with an old factory guy. Our first sample of it wasn’t well mixed so we had a bit of panic and tried to rematch it. After we tried a second sample it actually came back pretty close to what we felt it should be. The PPG number is 30024 and will match up with a 1939 Chrysler Dodge called Squadron Gray. I believe some Onan’s are also supposed to use this color. It has a slight touch of blue in it and is not pure gray. The red is pure Massey-Harris, we lucked out with multiple samples and all are dead on so we will go with that.

Certainly far less common then some companies, Rock Islands are, for the most part, not exactly as rare as many of their owners make them out to be. While an infrequent show tractor, there seem to be a surprising number floating around in barns and sheds; though most fall within a two models (G2 and F/FA). What many people don’t realize is just how large the Rock Island Plow Company was during the 1920’s. While its influence and market share waned rapidly in the later years; the company was by no means a small, fly by night shop. Rock Island tractors however, suffered from their absorption into Case, virtually disappearing from sight overnight, nor did they posses any unique designs to inspire collectors aside from fond recollection by those who had used them. 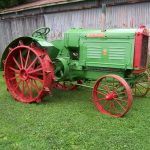 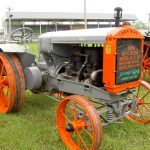 The Model G used a mix of parts including the Waukesha M engines used on the earlier Heider models. 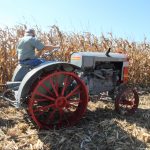 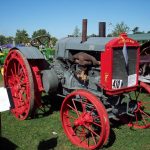 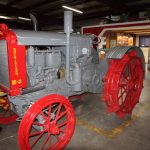 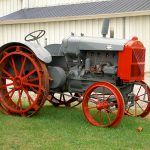 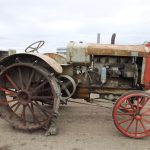 larger replacement to the F and H5 using a CHS Waukesha 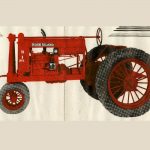