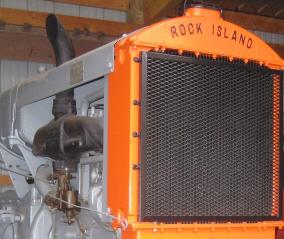 Not an actual power unit

electric motors or affordable tractor power. Alamo was on the ropes facing bankruptcy and RIPC was struggling.

With slow sales of tractors, Rock Island had plenty of engines available so began experimenting with multi cylinder stationary power units. According to a notation by Cornelius placing production as 1934, Rock Island produced four sizes:

A few examples of these still exist, I have knowledge of two such power units but do not have permission to post pictures of them. One is identified as being based on a Waukesha CS4J like a later G2. A guess would put that as the 25hp unit.

Advertising post 1930 is rare so I am still looking for any information regarding these power units.