By 1878 the B.D. Buford & Company had already established two branch houses in Missouri and would go on to establish four major regional hub branch houses, and another four sub regional branch houses. Its unknown exactly how much autonomy each branch house had, but certainly each was run to some degree as its own company with its own board, a catalog tailored to its region, and its own decisions on other companies to act as jobbers for.  In addition, an office was maintained for Exports and Foreign Contracts at 115 Broad St, New York NY.

The Northern Branch House of the RIPC was probably the most prolific and independent of the main branch houses. Advertising from the branch is plentiful, as are promotional items. Minnesota now contains a large concentration Rock Island tractors and collectors.

Now mostly referred to as the Pittsburgh Plate Glass Company building, the building was giving historic landmark status in 1977 and is currently loft apartments. Designed by architects Kees and Colburn, the building is considered a good example of Louis Sullivans influence. The building occupied in 1910, was destroyed by fire on may 28, 1910 and rebuilt as the current building. Apparently there was a move from the 3rd street location to Washington Ave. The new building was in conjunction with the Great Northern Implement Co. 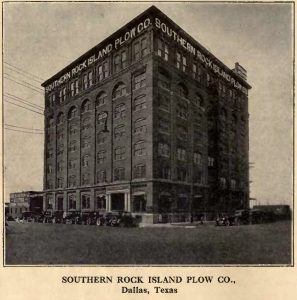 se of the Rock Island Plow Company. After the branch house burned down in 1901, it was rebuilt as a seven story building in 1903. After RIPC shut down, the building was sold finally to D. Harold Byrd who would lease it to the state of Texas. On Nov 22 1963, Lee Harvey Oswald, a temporary employee, would shoot president John F. Kennedy from the 6th floor of the former RIPC building that had become the Texas School Book Repository. Today, the building is a historical attraction and contains the 6th Floor Museum, housing a collection of artifacts relating to the assassination and the building.

The Southern Rock Island Plow Company had been formed in 1894 in Dallas at a building at Main and Austin. In 1894, the 411 Elm property was bought by RIPC for $9,000. Four years later, the company built a five-story brick structure. Struck by lightning and burnt on May 4, 1901, it was replaced the same year by the present-day structure. The Southern 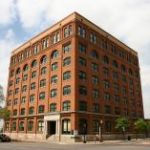 Branch house was probably the second most active branch house for the company, and probably diverged the most from the parent company. Its catalog was heavily slanted towards southern agriculture, and it was the first to add a gas engine line to its catalog. 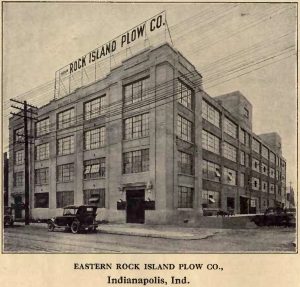 In 1885 Indianapolis was listed as a distribution house for the Rock Island Plow Company, but no information was given. Later on, the third main branch house for the company was stationed here, the Eastern Rock Island Plow Co. Although not as large as the North and South Offices, the eastern branch covered the prosperous eastern region of the US. Advertising and promotional items are fairly common with the Heider letter opener being a fairly common find.

Nothing remains today of the offices, nor can I find any indication of when they were torn down and little is known about the office itself. 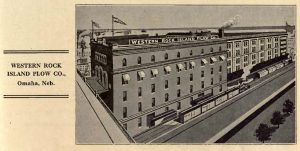 In 1880 Omaha showed up as a distribution house, it later became one of the four major regional Rock Island Branch Houses. Of the four main regional branch houses, the Western Rock Island Plow Co was probably the least well known. Literature and promotional items are not as common as the other three and it seems like they had less of an impact than the other three. Part of this may have been that Rock Island never offered large prairie busting steamers, tractors and threshers so never made the inroads other companies did.

Nothing is known about the buildings location, address or current status 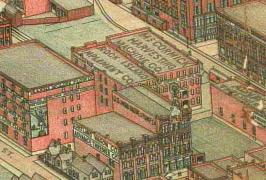 Established in 1878; the Kansas City, Mo office was apparently the longest running branch office and was probably the fourth official branch office. The St Joseph, Mo branch office was still running when KC was established, but by the 1886 all operations had likely moved from St Joseph and St Louis to KC merging the three. Although it was not a main branch office, it did seem to have an active management and KC promotional items and ads are not uncommon. Wagons and buggies seem to have been a major seller for KC as they were promoted heavily. KC seems to have followed a similar catalog as Oklahoma City, but also pulled heavily from the main company.

Address: 1310 W 13th St Kansas City, MO, according to 1899 information.  Although many of the buildings in the area remain, it appears this one was torn down and replaced by a garage . 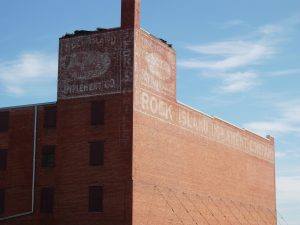 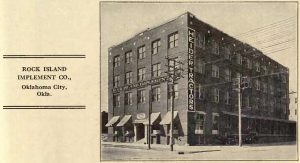 Although not a primary regional branch house of RIPC, the OKC branch seemed to have a larger role than the Western Branch Office. Advertising bearing its marks is fairly common place indicating it had a thriving business. Catalogs would have come from the Southern Branch House at Dallas.

The Rock Island Implement Co building of Oklahoma City Oklahoma still stands, although a ghost of the once proud building built in 1909. Today, the building has been empty for decades, but is currently part of a proposed revitalization effort so there is some hope still the building may be spared. The National Historic Register has a number of errors in its application, most glaringly an attribute to its construction by the RI Railroad.

The OKC Branch Office was added to the National Historic register in 1983. For more photos visit the Waymark gallery 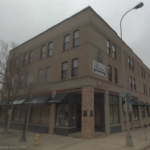 Little is mentioned about the Sioux Falls, SD branch office although it was established no later then the early 1900’s. I have not seen a lot of material from this office, and it likely followed the Western Branch Office catalog. Today, the building still remains. A really neat 3d view of the building can be seen HERE 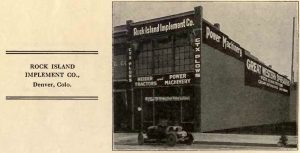 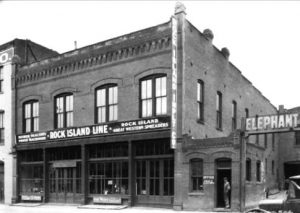 I have almost nothing on the Denver Branch house, and it may even be argued it was not a full branch house. It is included in the 1924 catalog as a branch house, and on some later brochures. It is absent from most other publications. Address 1408 Wazee Street Denver, Colorado. The building from the 1924 catalog from that address remains. The building to the right is unknown but is cataloged as the Denver Branch House..

Records indicate that B.D. Buford & Co had an official branch house at 417 N Main, St Louis IL. Although some vintage buildings remain in the area that is now N 1st Street between the Eads and Martin Luther Bridges near the waterfront where google places it, that building is gone. I can find no further records showing its appearance. I believe this branch house would have been the first branch house opened, it certainly is one of the two to appear on the 1878 catalog. However, by 1886 it no longer appeared on Rock Island advertisements or releases except for the 1924 catalog.

I have little information on the St Joseph, MO branch house, mainly a single letter head with an address and a

1878 book cover.  By 1886 the newer and larger KC Branch house had absorbed its operations and territory and it no longer appears on the Branch House list. This was probably the second branch house to be opened. According to St Joseph Memory Lane that has an incredible collection of local photos where this one came from, the building was demolished in the 70s in an urban renewal project. After B.D. Buford pulled out the building became the Johns-Woodberry Hat Company, The Dolan Merchantile Company and finally Tri State Insulation, Windows and Awnings circa 1955. 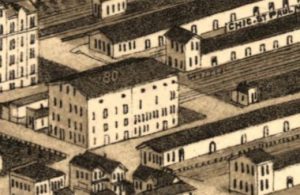 I find only brief mentions of the St Paul branch office, it was established in late 1878. The office moved to Minneapolis in 1901 where it became the Northern Rock Island Plow Co. This was likely the third branch house opened. The 1883 city map shows the offices of B.D. Buford & Co at the South east corner of Third & Broadway. This happens to be the same location as Mast, Buford & Burwell’s offices on their version of the 1885 RIPC price list. By 1892, Buford appears to have no stake in M B & B according to court filings, but also no indication either company moved.

Distribution houses were used in the 1880’s and 90’s and were replaced by the more centralized branch houses around the turn of the century. These distribution houses show up on various pieces of advertising although only one seems to have put out its own advertising. Each distribution house also had a regional sales representative that occasionally had information appear in trade publications.

Columbus Ohio- served as the regional office for the Ohio region by 1880 and occasionally acted much as a branch house, but so far no direct source shows Columbus as an official branch house. Some pieces of Columbus advertising exist. This distribution house may still have been active into the 1900’s.

Peoria Illinois- the 1880 B.D. Buford pocket brochure lists Peoria as a Branch house, this is the only time I have found Peoria listed as a branch house. On later brochures, Peoria occasionally is listed as a distribution house.

Milwaukee Wisconsin- Only listed on the 1880 brochure