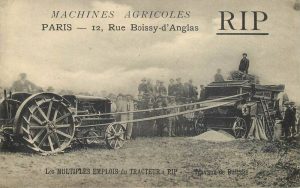 One of the more interesting tractors to spring from Rock Island is the poorly named Rip, a clone built by Societe des Machines Agricoles RIP of Paris, France; a company that had begun as an offshoot of Monsieur’s Siegel & Hommey’s tractor import company that brought Heiders to France and Italy. For more information please visit the RIP companies page . The Rip is unique in Rock Islands history right now, as it is the only confirmed licensed clone manufactured outside of Rock Island. The Canadian Beaver MAY have started as another example for much the same reason, but so far no concrete evidence has surfaced to show a connection and the design soon diverged. 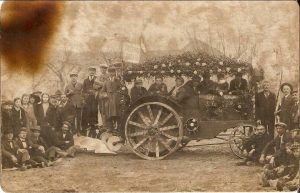 The Rip was a direct clone developed from the Heider line in response to strict tariff laws in France in 1920. It became cheaper and easier to set up and produce a tractor built in France than to import one in, a strategy employed by other tractor companies like IHC and Austin as well.  Unfortunately, not a lot of information has surfaced on the Rip, but I have found enough lately to now justify separate pages for the tractor and the company. The tractor itself is virtually unknown outside of Europe and most print references are in a handful of books and pictures by Andrew Morland. 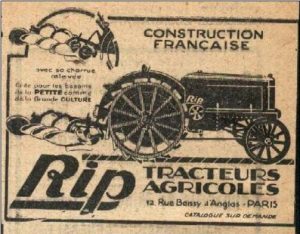 article from a 1920 magazine with an excerpt about the new 10-18 Rip and its performance at l’Exposition Des Tuileries. It is immediately notable that the surviving Rip’s apparently have the same Waukesha M engine as the 12-20 C Heider I have been told. This makes the 10-18 rating seem rather anemic, and the 2-plow lift shown was the same as the Heider D 9-16’s and not the 3 plows of the C. To further confuse the issue, an undated brochure advertises the Rip as a 12-22 and shows three plows, furthermore the engine is advertised as approximately 4 1/2 x 5 5/8 and 1000 rpm, further diverging it from the standard Heider.

So far, no literature has appeared to indicate two separate models rather than successive improvements, but the possibility does exist that two models were in production. The Rip, aside from the engine and friction disk design, was not an exact copy of the Heider. The frame was modified and overall was given a slightly sleeker look with a different gas tank design. The canopy of the C was done away with, though an original picture taken at Loriol shows a full length canopy. 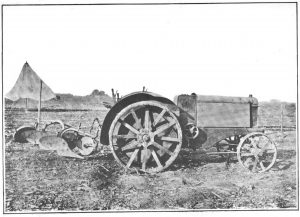 Without the opportunity to examine one or a parts book, it is difficult to say for certain just how much did change to fit the European market. The overall size was smaller then the Heider D, with the RIP coming in at 126 inches long (2 inches shorter than the D) and much narrower at a mere 63 inches (compared to the D’s 68 inches).  The pulley was a mere 11.8 inches diameter. The overall weight was listed at 2550 kilos or 5620 lbs. The drive wheels were listed at 48 7/8ths and 7 1/8th wide in the 1920 Egypt trials, while the front wheels were listed at 31 1/2 x 4 1/8th.

Although production began in late 1919 or 1920, it is unknown for certain how long the Rip was produced. The RIP company split off from the parent Rock Island Plow Company in the mid 1920’s and by the 1930’s two new home grown designs were appearing.

I would like to thank David Parfitt especially for cluing me in on this tractor and providing material. I would really appreciate any opportunity to speak with a Rip owner or examine copies of materials.

The RIP of Paris Company Page can be found

surviving Rip owned privately in the Ile-de-France region from Morlands “Tractors of Europe”. 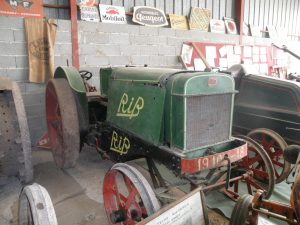 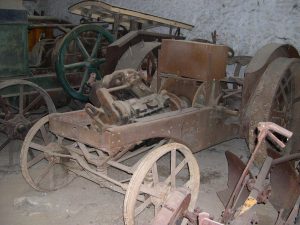 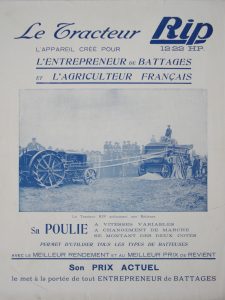 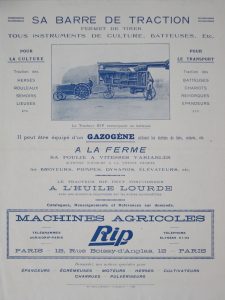