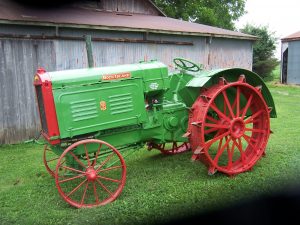 This tractor is one of the few known early Rock Island 1927 Short Fender 18-35’s left. Although we are confident the serial number is below the the 250 serial number, the tag is lost. The enigne however, is engine tag YR 154989; making this engine only 40 off the Nebraska Test tractor #178.

We purchased this tractor at the Jerome Cafferty auction spring 2011 and is the focus of much of this section. Jerome had had this tractor for about thirty years and had not really worked on it he said. He also could give little history to the tractor. At a glance, the first thing to stand out is the green paint, a detail that has baffled us. Second thing to stand out is that this tractor DOES have the cut off fenders, with an extension added on to lengthen them to standard. This looks like it may have been factory, or else very well done from another Rock Island fender.  We debated leaving the extensions off, but they are a true part of the tractors history that doesn’t appear in any brochures or parts catalogs. Although the difference without them is striking, there were practical reasons they were put in place so for now they remain.

After purchasing the tractor, we began to note a few other surprises. One of the first we found was that this tractor was missing the governor entirely, a simple metal plate had replaced the back of the governor housing. Our supposition is that at one time this tractor had a generator on it that was later removed, taking the governor with it. The governor was obviously set up without the external adjustment. A replacement governor and housing back were obtained from a later model and were slightly modified to fit. Like the Garnett tractor, this F is missing its tractor tag, it does however have an engine tag: YR 154989; making this engine only 40 off the Nebraska Test tractor #178. Since it appears Buda used sequential numbers on all its engines, and we have no way of knowing how engines were matched to tractors, its impossible to say for sure how close to #178 this one is in serial number, but certainly it seems likely it was within a few digits, and below serial number 200. There is also the chance it was built even slightly before #178, although we are highly unlikely to ever know.

We also discovered to our dismay that the axle gears on this tractor had been improperly hardened, and use had ground the gears to almost nothing. Again we were able to obtain replacements from a later tractor.

The green paint was not of the correct color, but we have confirmed on a G and a few additional F’s original green color (one in the 350 serial range). This one we never found a solid trace of original paint, but a few places were possibilities. We did find lots of red, but we don’t believe it was original to the tractor and was later primer. Original green we now think was a lighter than JD shade. The mix we used we think might have come out a little lighter than planned, but is in the ball park.  Pin striping to be determined as currently no literature has come up.

This one also possessed the normal style of aircleaner arrangement, but this was likely done as an upgrade.There was a hole cut in the hood for the stack now, but we have since had it patched and are returning to what we believe is the original style air cleaner, an impeller style like on the Heider C 15-27.

This tractor is also in need of a throttle/spark advance control assembly, these were a wire system.