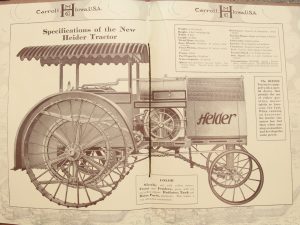 he Carroll built Heider B could best be considered the production version of the A, the A’s design was simplified and refined and orders poured in. Improvements included a larger canopy and drivers platform and even more importantly, the single speed design of the A was replaced with a two disk friction drive ahead of the pinion gear instead of behind. Another change was the engine.  Although the A had a Rutenber engine mounted over the rear axle directly in front of the operator, the B used a Waukesha 4 cylinder L 4 1/4 x 6 3/4, kicking off a relationship that would last for two and a half decades. In some sources, it is claimed a Rutenber engine was still used; however Randy Kvill of Reynolds-Alberta confirmed their B -237 does have a Waukesha as shown in the catalogue. It is possible some early B’s used the Rutenber but so far I have fund no direct documentation of this. Also, it now appears not enough L’s were shipped to account for all the model B’s built. this may have been accounting on Waukeshas part between Rock Island and Carroll, but it seems more likely another engine was used. The Heider B sold on Jim Erdles sale and currently undergoing a complete restoration has a Waukesha M in it, but again, no documentation directly supports this. .

The new transmission design and the upgraded engine led to an increase in horsepower, with Heider calling the B a four plow tractor. The horsepower rating however, was initially offered as 8-12 and was later upgraded to 9-16. Early Heider B’s used the same style of radiator as the Heider A, but later ads and photo’s show a new automotive style radiator design with an extended shroud. This may have occurred at the same time as the HP was rerated.  Photo’s exist of Heider B’s pulling a 4 bottom plow, but no description of the actual soil conditions or plow size.

It is uncertain as to how many Heider B’s were actually built, the model C’s serial numbers started at 400. According to John Heider’s research presented in Antique Power July 2004, The Heider B’s were sold through three main distributors: 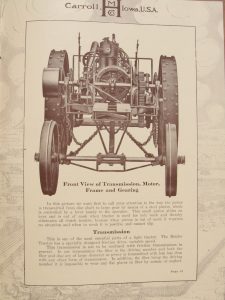 Crosse Plow Co. purchased 1 tractor in 1912, 35 in 1913 and 8 in 1914 totaling 44. The LaCrosse Plow company also contracted with Heider to provide implements for the Heider.

An additional estimated 79 including the 35 – 37 A’s were sold individually, advertise in North America and the UK. .Gilson Mfg of Guelph, Ontario served as the Canadian distributor. 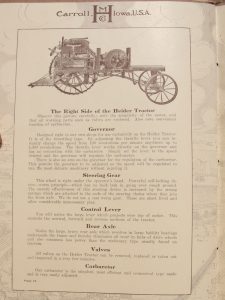 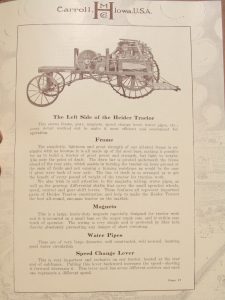 According to Randy Kvill, the Reynolds Heider was purchased  by Stan Reynolds in the late 1950’s from the original owner, who had bought it new and brought it into Canada when he immigrated from the U.S.  Randy believes that  B237 may be a 1912 model based on the accompanying literature and that serial numbering may not have been sequential starting at 1; instead possibly starting at 100 or  some other number or perhaps jumping to 100 on transition to the B.

At this time, only two other Heider B’s are confirmed, one now in a private collection undergoing a full restoration after its sale at the Jim Erdle sale.  A second B is in Iowa and bears the LaCross name on the radiator, it is in a collection along side the one known A and a model C and is currently running. All three bear the early style radiator.