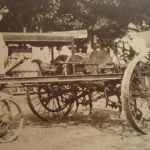 The Heider Motor Cultivator was Rock Islands entry into the rapidly expanding field of motor cultivator tractors with such names as Emerson Brantingham and Avery. Companies like John Deere, J.I. Case and IHC also experimented with this concept, but they never really entered the market.  This didn’t stop dozens of other companies in what was considered at one point the fastest growing market.   Although a good concept on paper starting even around 1910, their limited use and light construction limited their utility and the introduction of the Farmall finally ended the idea of a dedicated cultivator tractor.

Although advertised as a light all-purpose tractor,  the Heider cultivator tractor was not as solidly built as such tractors as the Moline Universal and Allis Chalmers 6-12 (which along with the Indiana and IHC motor cultivator were some of the many tractors to use the LeRoi 2c). The M/M1 especially would prove to be fairly unsturdy and it is unlikely too many farmers equipped it beyond the cultivator gangs. The M2 however, with its narrower, more rigid frame did see use for other tasks including plowing and grading.

Capable of mounting 4-, 6-, and 8- shovel gangs, a 16” 1- bottom plow, or 6 or 8 disk gang; the M was supposed to be a replacement for a range of horse drawn implements. Unfortunately, it was unable to plant and so could not entirely replace a gang of horses. The engine and radiator were detachable with 6 bolts according to literature to be able to transport the engine as a portable 10hp power unit (Although this is not an entirely easy task).

Although I have lumped the M and M1 together in the past, it is now clear they were actually considered two separate  models. The M was the earliest version, and featured a direct gear drive and large gear box.  The M1 used a chain drive and featured a smaller gear box, the gear box farther forward and a different layout for the hood supports. Although a belt HP of 10 is agreed on, 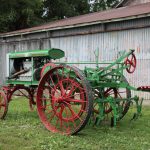 there is conflict about the drawbar rating. The literature I have all indicates a drawbar HP rating of 5. However, a 6 HP drawbar rating is often given by authors. Erb in “Full Steam Ahead”  claims the M2 as 5-10 and the two row model as a 6-10. Contrary to some authors, the M2 was the successor to the M. In earlier literature, the two row M is listed, soon followed by the designation M1 and M2. Later in advertising, the M1 mostly disappears and is almost strictly advertising for the 1-row M2.

An article reports in 1918 that although Rock Island displayed their motor cultivators, they did not take place in trials.  An article in  Feb 1920 in  Automotive Industries may possibly give a clue as well. The article states  “Although it is making its initial appearance at the show this cultivator has been in use for about 2 years as an experimental proposition”.  This is actually supported somewhat by the lack of motor cultivator references in Rock Island literature prior to 1920, for instance it does not appear at all in the 1918 full catalog. Furthermore, the two patents filed in regards to the motor cultivator occurred at different times.   Patent #1529023 was filed in December 1918 and covered the M (M1) steering , front wheel and cultivator gang mechanisms. The second, patent #1546446, filed April 1922 was for the concept of having the engine as a removable power unit. Interestingly, the motor cultivator used a yoke mechanism to move the disk forward and back, instead of moving the entire motor. Oddly enough, this mechanism was not adapted into la

The Motor Cultivator was advertised as being exceptionally short turn, featuring a design that turned the front wheels and gang at the same time and on the M/1M1 was especially designed for a short turn radius. A brake was equipped on each differential allowing the drive wheels to be slowed or stopped independently, but the positioning meant in practice the brakes were virtually useless. The speed is very fast, and on the M2, the chain steering does not permit precise steering fine adjustments when cultivating were made with the feet.

Operating the M/M1 was tricky with 6 speeds forward and back, two brake pedals, left and right foot controls for shifting the gangs left and right, two lever banks of two levers each (raise and lower each gang and on one lever raise and lower both gangs together). Steering on the M1 was very short and fast with the front wheels being able to turn almost around. At over 8 feet wide for a wheelbase it is stable, but light construction made it seem fragile. The M2 on the other hand, was a much more compact design, resulting in a much more rigid frame. Having only one gang to control resulted in a much simpler design and it could be run on the fly without stopping at the end of each row to raise and lower the gangs. Advertising shows the M2 doing multiple tasks such as plowing and disking.

Despite being part of the fastest growing market segment of the lat teens and early 20’s, motor cultivators could not survive the introduction IHC Farmall.