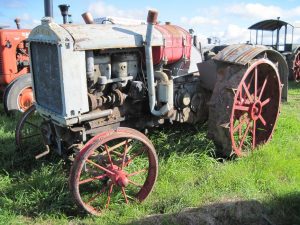 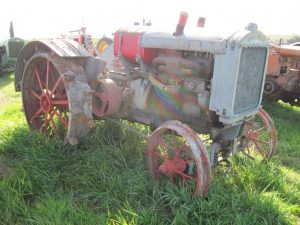 Rock Island 1929 G2 #90091 or the 91st G2 built was one we bought at the Fahey auction for Paul Bussert in MN in October 2010. This was a massive auction with over 700 tractors, and 3000 lots. the Best 300 or so tractors were sold individually, then two lots of parts tractors sold as lots of 150 each, then the remainder sold as one lot, as is, where is, bring your own chainsaw.  Not expecting much, we bid online, luckily Tony Thompson of  http://twincitytractors.tripod.com had found missing pieces and put them with the tractor. At some point a shed had fallen on it so it was in less than perfect condition. In fact, it turned out to be pretty rough. Overall we thought it had a lot to offer (well, more than it did, we bid online) and an extremely low serial number. Considering its the most commonly seen Rock Island model though, we might have been better served starting with a better one. Two donor parts tractors contributed greatly including an entire front axle assembly and a rear axle, a steering wheel, seat mount, control levers, gear shifter (this had a late model gear shifter on, so we went back to the early style), and a many other pieces. The engine was badly stuck so had to be rebored and new valves made. Considering the G2’s commonality, we decided to put a few options on it.  We added a PTO unit from one of the parts tractors, which was incomplete. Very few Rock Island PTO’s are known to exist, and none appear complete or functional so we had to engineer the missing parts and the missing hitch assembly. We also took the opportunity to switch it to the less commonly seen gas only manifold.

A word on paint. The old Dulex number 93-6334 is out of production. This is the number Dick Bockwoldt came up with from working with an old factory guy. Our first sample of it wasn’t well mixed so we had a bit of panic and tried to rematch it. After we tried a second sample it actually came back pretty close to what we felt it should be.

The PPG number is 30024 and will match up with a 1939 Chrysler Dodge called Squadron Gray. I believe some Onan’s are also supposed to use this color. It has a slight touch of blue in it and is not pure gray. The red is pure Massey-Harris, we lucked out with multiple samples and all are dead on so we will go with that. 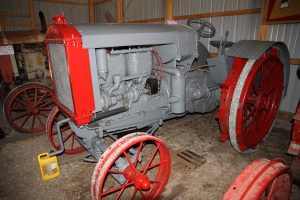 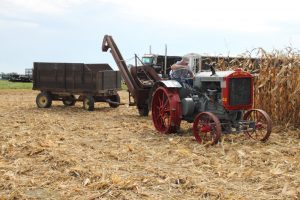 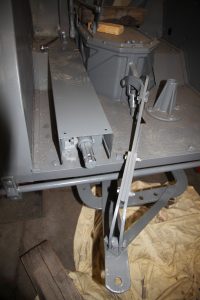