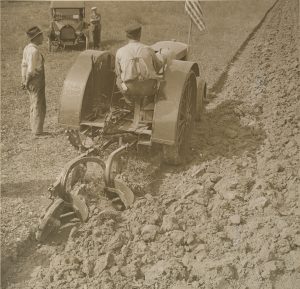 With the demand for smaller tractors for smaller farms increasing in the late teens, Rock Island released a smaller 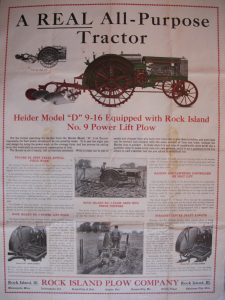 version of its popular Heider C in 1917. The Heider D featured a 4 1/4 x 5 3/4 Waukesha R engine but was otherwise a scaled down C without canopy or side curtains, although almost no parts are interchangeable. The loss of the curtains may have been practical as well as a cost cutting measure as many farmers removed the side curtains on the C to improve airflow over a hot running engine anyway. Saving money on the D was primary to make a cheaper tractor. Babbit was used instead of roller bearings and cost saving measures were used anywhere possible. Compared to the C, the D was significantly under built, cruder in design and significantly less time taken in fit and finish.  The D used the same friction drive with 7 speeds forward and reverse as the C.

Like the Heider C, the D was one of the first tractors to be submitted to the new Nebraska Test Lab, Nebraska Test 17 established the D’s actual HP at 11-19. Despite being a smaller tractor then the C, it was heavily advertised as a two plow tractor with Heider’s Plow Lift (see the tractor plows section for more on the plow lift) and many of the surviving D’s retain the plow lift, suggesting it was an effective plow tractor. Unlike the Heider C, the D was designed with the plow lift in mind, though it also retained most of the design features of the Heider C as well. Only a couple of early catalog photos show the D without a plow lift, after these initial photos, the D was always advertised with the 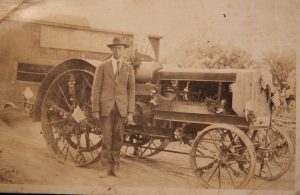 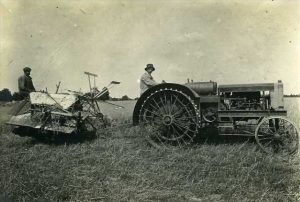 The Heider D remained in Rock Islands inventory from 1917 until ~1928 with few changes. Catalogues listed the D into 28, although all production likely stopped by 1927.

Currently, we are restoring a model D, the project is near the halfway mark. I am uploading the build gallery: