The Model A was the first production tractor from the Heider Mfg in 1911. Its predecessors had all been highly experimental and featured little in common initially with the A.  The model  A  was built around a Rutenber engine and was rated a three plow 8-12 hp tractor (or Traction Engine as it is referred to in patent 1055635 filed Feb 20 1911). An advertisement first appeared May 1911 in Gas Power Magazine, and an announcement of the expansion of facilities appeared one month later.

According to John Heider’s research presented in Antique Power July 1994, a very limited number of Heider A’s were built, only 9 before Oct 25 1911 according to the Carroll Herald and only 25 in all of 1911. another 10 or 12 were produced in 1912 as the Heider B went into production.  They were reported to cost $775 to produce and retailed for $1300 and most were sold mostly around Carroll Iowa. The timing of the factory expansion however, indicates that although relatively few tractors were built initially, the Heiders already saw large potential in their new tractor. 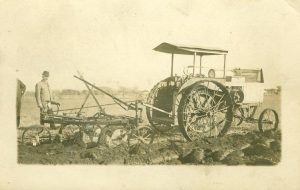 The Heider A featured a simple channel iron frame design, simply bolted together strap iron, a home built radiator and French & Hecht wheels (which would remain a fixture until Rock Islands closure in 1937). The Rutenber engine was mounted over the drive wheels leaving little room for the operator and an external flyball governor was used. The friction transmission the Heider would later be so famous for consisted of a single speed forward and reverse as the engine was fixed in place. A steam traction style drum and chain steering mechanism was employed with a chain driven final drive.

The only known Heider A remaining is believed to be the one Richard Collison of Carroll IA restored. The details of its restoration are in Antique Power July 1994.This A is actually thought to possibly be one of the earliest if not an actual prototype as it does not match listed specs, especially having very narrow wheels.

The Heider A is actually a very notable tractor as it was one of the first true all purpose, light weight tractors to be produced.  A look at any listing of tractors in 1911 shows a wide variety of heavy weight prairie tractors (a few being low in horsepower, but still following the heavy weight design, the Hart-Parr 17-30 for instance weighed in around 7 1/2 tons), self driving gas engines mostly suitable for belt work only and a hand full of various styles of motor plows. The concept of a light weight, all purpose small farm tractor to replace a small farmers team of horses was still a novel concept. By 1910 the form of the large tractor had mostly settled into something fairly recognizable as such, but the light tractor would take nearly another decade to settle into a more standardized form.