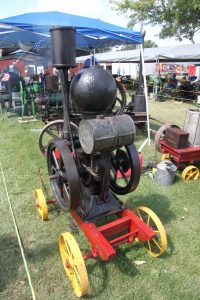 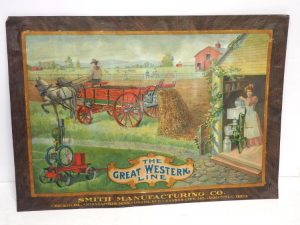 Although a prolific implement manufacturer, RIPC was not above acquiring companies it felt would be useful to its product line. The Smith Manufacturing Company of Chicago was a major innovator in the manure spreader market and had a highly reputable cream separator as well as other products like their litter carrier. Along with the implements and separators, Smith had marketed the “Great Western” gas engine and with it came Rock Islands first foray into the power farming age.  Jeff Marshall has an excellent page devoted to Haish Mfg. at www.jacobhaishmfg.org. When Rock Island took over Smith Mfg., they had already been acting as agents for the Root & Vandervoort company of Moline IL so were not entirely new to the engine market. R&V also had extensive ties with John Deere and Deere was also heavily increasing its demand for engines.  Deere, as the senior customer, did not like others sharing its product line and eventually negotiated a contract for all of R&V’s out put of engines. .

In October 1911 The Rock Island Plow Company acquired the “Great Western” line from Smith Mfg Co. of Chicago, which in regards to engines, seems to have been little more then a distributor for Haish as well as producing their own line of Great Western Cream Separators, Manure Spreaders and litter carriers.  Besides acquiring the rights to these; they also obtained rights to the Jacob Haish gas engine line of the same name came with. Jacob Haish of DeKalb IL had been manufacturing engines for Smith for nearly a decade by that time (Haish was also the inventor of the famous “S barb” barbed wire and had built an empire on that). Although Rock Island continued to use the Great Western name on other items, the “Great Western” 2-cycle engine in Rock Islands inventory was extremely short lived by accounts and was dropped in favor of Haish’s newer “Chanticleer” line in 1912 as Haish discontinued production of the “Great Western”. This should have meant a very short marketing window for the Great Western. Apparently, some inventory of Great Westerns remained however, as in 1914 RIPC advertised Great Westerns at wholesale prices in the Farm Journal (ad below) well after the accepted end of the line. It is unknown if these were left over in Haish’s inventory, or if these were badged as Rock Islands. 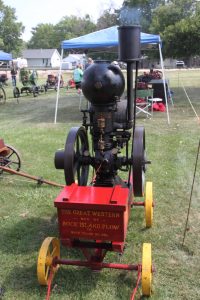 Rock Island did not hesitate to trade heavily on the Great Western name, advertising it prominently in their advertising. In the 1913 Rock Island Plow Company Catalog, an entire page was given over to the purchase and that RIPC would not be changing the Smith line. (below). Although the Great Western’s were built for a number of years, they are a rare line today. Currently, according to the registry at JacobHaishmfg.org, there are no known “Great Western” Rock Islands surviving. As Rock Island only sold the “Great Western” for a few months, this is not horribly surprising.  It is even possible that a Rock Island Great Western would not even have been tagged with the Rock Island name. The tag to the right is often thought of as an engine tag, but was more likely used on a cream separator or manure spreader although some of the patents may apply to engines. 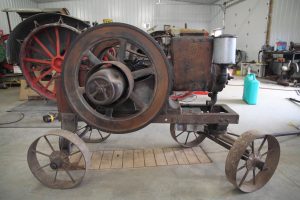 it is unclear how many of the largest sizes were actually sold through Rock Island. A chart with HP ratings and details can be found on JacobHaishMfg.com. The “Chanticleer” name and rooster logo were dropped from the Rock Islands and a new tag and logo were added. According to Marshall; of the Haish Rock Islands he’s seen, two were painted grey while the others were painted the customary brown.

Of the Chanticleer style engines, a few Rock Islands still survive. A much larger number of engines sold through Haish, Sandwich and Appleton survive, with Appleton being the most common apparently. Considering many engines have been found incomplete and without their tags, it is certainly possible there were many more unknown survivors as Rock Island had distribution capacity to be a major seller.  To add to the confusion, according to The chart, Haish engines with the same dimensions but different RPM’s and HP were marketed before and after 1912, leading to why most Rock Islands fall into even HP ratings. 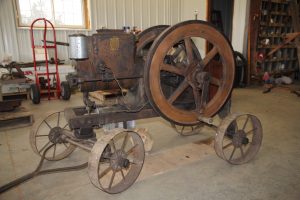 In 1914, Haish suffered a major fire, which may have impacted his relationship with RIPC. An interesting notice appears in Industrial World June 1 1914 stating that due to the fire, The manufacturing facilities at Haish’s Dekalb plant would be move to Rock Island, including the gas engine manufacturing. Apparently, this fell through. Instead, in 1914 Rock Island had apparently dropped the Haish line in favor of the Alamo line, although some sources indicate that Rock Island may have still sold Haish engines into 1916.  By 1917 Jacob Haish had sold the engine line to Appleton.

Few details are mentioned about the exact parting of ways by Haish and RIPC, but it seems likely Jacob was finally looking to retire at the age of 88 and perhaps was looking for a better deal than RIPC was offering. By that time, it appears Appleton was already taking a significant role in engine production and may have edged Rock Island out on a deal. Jacob would die just eighteen days short of his 100th birthday on March 9th 1926 and is regarded as a significant histo rical figure and philanthropist in Sandwich and Dekalb County.