In late 1913 or very early 1914 Rock Island started acting as a distributor for Alamo gas engines built by the Alamo Engine Co. out of Hillsdale Michigan. Its not entirely certain if Rock Island for a time sold both Alamo and Haish engines, if there was a gap or the transition was fairly clean. Either way, by mid 1914 the Alamo’s were front and center to Rock Islands line.

Alamo was a large producer of Hit & Miss engines already, but far preferred to allow other companies to distribute their products in the teens. As such, Alamo’s were sold under a dozen plus names according to Denis Rouleau’s Buzzcoil Alamo site, including local rival the Moline Plow Company under the Flying Dutchman name. By many accounts, Rock Island would become the single largest distributor of Alamo engines, and by agreement was allowed to sell the engines entirely under the Rock Island name and colors.

There is much debate on the exact color of Rock Island engines, but Dulux 93-24590 brown seems to be a common standard, however, it is extremely common to see them at shows ranging from a pale mustard to a dark brown. This has been a common topic of discussion with the assumption there was only one correct color. After talking with owners and examining original engines, it appears that there were at least five colors used for the alamo line ranging from a pale yellow to a dark brown. so far, no pattern has emerged on coloring so it may be branch house related.

The Rock Island/Alamo’s came in a variety of sizes ranging from 1 horse up to 25 horse. Because of the number of resellers, there is some inconsistency across the various lines, with the same engine possibly having 1/2 to a full 1 hp difference depending on whose tag it carried.  Because RIPC was primarily a farm company, there was little demand on them for the larger engines and most Rock Island Alamo’s fall in the smaller sizes up to about 5 hp.  the A type alamo’s in some cases used larger flywheels to make a higher hp than other labels. Like other distributors for Alamo, Rock Island provided its own badging for the Alamo engines they sold with the Alamo serial number. However, because of the earlier association with Haish, an “A” was added to the front of early serial numbers, this was apparently unique to Rock Island. To add to the confusion though, Alamo in general referred to their main line of engines as “Type A” which was often a part of the brass name tag from 1900 to 1913. Later, B, G and C were added to Alamo tags, however, Rock Island appears to have carried only the A and C prefix’s.

According to the Buzzcoil registry of Alamo engines, sometime in 1923 the A was briefly dropped from the Rock Island engine tags and they were printed as strictly numeric numbers. A few months later a C prefix was added to most of the Rock Island engine tags. After 1923 the registry shows only Rock Islands with C prefixes. Although engines built after 1923 are considered Type C, D or G, this wasn’t necessarily the meaning of the C on a serial tag according to Denis. The exact meaning of the C is open to speculation, but it may have meant equipped with a Wico mag, though I have doubts on this as it would have meant all Rock Islands came so equipped.  My thought is in the case of Rock Island, it was to distinguish them from the A line, and other agents followed suit. The new engine designs were entirely different designs, and could be smaller and lighter per horsepower. Many RPM ratings were changed as did the bore and stroke for a given horsepower. These new engines I differentiate as “C” types. Although a large number of C’s appear to have survived, based on serials they were less produced then the earlier type A’s by a large margin. Most parts do not interchange between an A and C type.

By the late 20’s, the stationary single cylinder gas engine market had waned. Electric motors were becoming common and tractors had become far more affordable and versatile. When Alamo began to falter in 1930, Rock Island was already moving on and the official dissolution by court order on August 18, 1932 of the Alamo Engine Co would have little impact on the already distressed Rock Island Plow Co. In total, Alamo was to have produced nearly 116,000 engines, making it one of the top dozen or so manufacturers of gas engines of the day. Despite large production numbers and a relatively large number of survivors, they are a somewhat uncommon engine at shows under any label, although Rock Island and Alamo are the two most common names seen typically of the Alamo family. 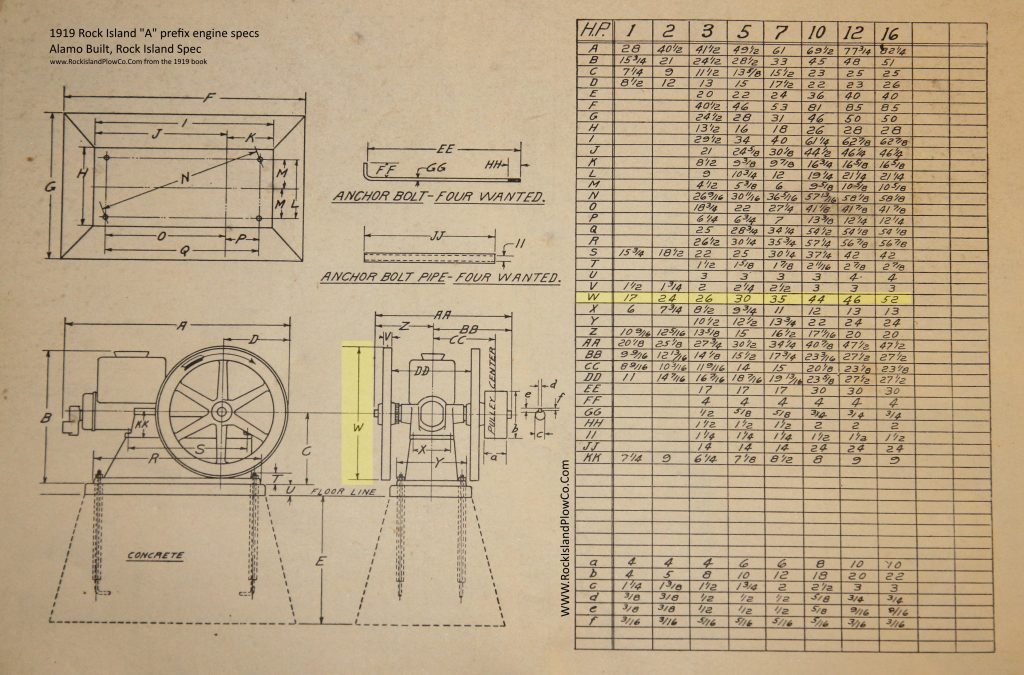