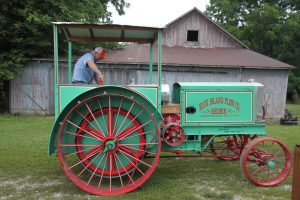 When I started on this website, I was given a lot of information from various parts catalogs by SmokStak’s Bud Tierny. One odd notation that showed up a few times was for a Heider D.U. 18-30 However, until I contacted the Western Development Museum’s George Shepherd Library, I had not seen literature from Rock Island directly related to the D.U. so we had somewhat operated under the idea it was a misprint or unknown engine option. Thanks to Kirk Wallace at the Western Development Museum’s George Shepherd Library, I was able to obtain a set of catalog pages showing I was wrong. A few years later, I was able to obtain the actual Waterloo Mfg catalog the DU was included in.

After receiving the WDM material, I was able to identify a possible DU and contacted the tractors owner, Jim Matson of Montana. Although the tractor had no serial number the engine was confirmed as a DU and from pictures and description I had a high degree of confidence this was a DU. Another possible DU was located in a museum in Spain, which was later confirmed. In spring of 2015 Jim contacted me and asked if we would be interested in purchasing his DU, which we jumped at. Along with the tractor came pictures of the restoration and some history.

Jim told me he remembers a Heider on the family farm as a kid with the exhaust on the same side as the belt pulley. When he went to Reynolds-Alberta during their downsizing in the 80’s, he had the option of 2 or 3 Heider C types. This one he selected due to the location of the exhaust being the same as he remembered. Purchasing the Heider he brought it home and began a multi year restoration process. The result is the tractor pictured. Liking the Heider exposed gearing he left the tin sheets off the wheel gears and thinking the seat and pedestal were incorrect he replaced them. We believe the original seat and pedestal were correct from Reynolds, and had by happenstance received one on a previous tractor purchase and had not succeeded in identifying it except that the previous owner had said it was Rock Island. 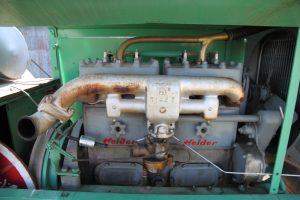 The layout of the tractor is dictated by the engine, the chassis is basically a 15-27 with some extra guards and a handful of updated castings. The main differences besides the motor was the addition of a much larger than normal radiator. The extra height required the hood to be raised so extensions were added to the hood supports instead of making new longer ones. The controls were moved to accommodate the different carb and mag layout. The engine itself, being larger and a different design than the M/P engines required additional castings to mount it.

According to Waukesha, 36 D.U. engines were shipped, which would make the number produced on par with the Model A and vie with the A for being the least produced model of Heider. The DU at Museu del Tractor d’Època in Castellbisbal, Spain is also missing its tractor tag, however its engine tag is 85186 while ours is 85182. Both tags show 1926, which agrees with the catalog; making these DU’s possibly some of the last Heiders built.

The actual designation of D.U. however is out of character for Rock Island when one considers their normal naming procedure and is the only tractor so far to be named after its engine and also seems odd in that it would have likely caused some confusion with the much smaller 9-16 D.  The addition of the D.U. to the list makes for a very intense amount of new tractor variations in a short term around late 1924 through 1927 with the following tractors all appearing in the lineup around that time period:

Mr Tierny’s catalogs also indicated the following engine notations besides the DU sharing certain parts: CU (Listed as in the 9-16), DR (in conjunction with the DU), and DK/DKR (DKR confirmed on the 1930 Canadian special F) and BU.  According to Waukesha Engine historical society however, No CU or BU engines were shipped to Rock Island. The BU may be a mislisting though as a number of EU engines were shipped and used for the Model E 18-35 and even a few unaccounted for GU’s were shipped. The CU could have been a replacement for use in the 9-16, but with no engines shipped it seems unlikely a Heider CU was ever built.

As always, I hope that more information about this tractor will appear, any additional information would be greatly appreciated.