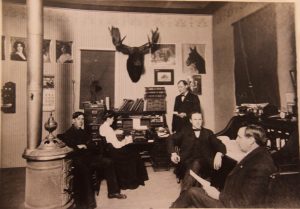 Inside the Heider Mfg office, Henry J on the left, sister Margaret, and John C on the right. The man standing is unidentified.

from Troy Grove IL. Henry Heider proved to be an able manufacturer and inventor, with his first patent already at the age of 21 for a four-horse evener (the first of over 20 patents) and a successful repair business. His elder brother John had left home for a career in accounting and business, but in 1903 he and Henry decided to go into business together after Henry’s business outgrew his capacity to run and still farm. With demand for the 4 horse evener strong, the brothers set up shop in Albert Lea, Minnesota, but in short order outgrew this small shop. The decision to move to Carroll, Iowa meant a full sized facility and the need for much expanded company. Henry remained in charge as president

and chief of manufacturing, L.C. Klein took over as V.P and in charge of sales, and John acted as secretary/treasurer.  After incorporating, $18,000 in stock was sold, mostly to locals, to finance the concrete block factory to be built in 1904.

Business at the Carroll plant consisted of eveners up to six horses, yokes, double and single trees. The company even produced a line of step and extension ladders designed to use up scrap lumber that they sold across the Midwest with their other goods. The ladders became so popular they ended up as a large part of the Heider business, even being a major part of the reason to purchase a new 10 HP Lambert engine in 1906.  Henry proved to be a consummate inventor and tinkerer, often designing new parts and machines for the factory. Unlike many companies of the day, day to day finances were never a major company problem as John proved to be an able manager and accountant. However, these finances were not enough to finance the next major Heider expansion.

In 1907 the Heiders purchased another Lambert engine, this time a massive 25HP. For whatever reason, about the same time Henry became interested in gas tractors. In “Humble beginning: History of the Heider Manufacturing Company” by R.E. Hoffman (Antique Power July 1994) with John Heider; Hoffmann suggests that the Lambert may have come with a brochure for the Lambert line of tractors. Lambert (also incorporated as the Buckeye Manufacturing Company), although specializing in gas engines, was also producing friction drive tractors at the time. The Smithsonian credits Lambert with the first friction drive transmission and Lamberts early tractors incorporated a Morton Traction Chassis with Lamberts own engine. Certainly, it is hard to believe that it was pure coincidence that Henry would follow so similar a path with his own early friction design.

According to Hoffman, the 1908 company ledger for the first time carried a section called “tractor account”. Henry would move slowly in his development of a tractor design, creating and discarding multiple designs, including according to Hoffman & Heider, a design similar to the later Moline Universal. One such early prototype (below) reportedly remained in use at the plant for a time. Sometime in 1909-1910, a conventional, 4 wheel friction drive design was settled on. According to records, sales of ~25 Heider A’s were made between March 1 1911 and 1912 according John Heider (Hoffman AP July 94), with only 9 having been produced by Oct 25, 1911 according to the Carroll Herald.  A major palnt expansion was also announced in 1911 in anticipation of increased sales. Outside assistance from the Pioneer Implement Company of Council Bluffs IA helped bring the tractors to market and served as a distributor for Heider.  It’s likely they had already been selling Heider products with their own implement and buggy business.

Production continued with sales exceeding expectations with the Heider B introduced in 1912 (an improved version of the A). The B proved a success and underwent various refinements but its shortcomings were readily apparent to Henry. It soon became apparent that serious measures would be needed to keep up with demand, and so a new partnership was sought with a major company with the resources to bring the new Model C to market. The Rock Island Plow company fit the bill, and was also looking to add a tractor line to their extensive implement line.  While the last of the Heider B’s were being passed through the Rock Island Plow Company in 1915, the Heider C was also coming into production.

The Heider C proved to be an incredibly popular tractor of the day, and Heiders Carroll, Ia facility soon found itself unable to keep up with demand. Facing the 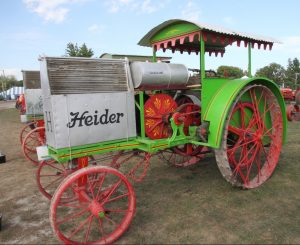 prospect of a costly expansion, the decision was made to accept an offer from the Rock Island Plow Company to purchase the Heider tractor line. The Jan 5th 1916 Carroll Herald made the announcement in an article that the tractor line would be split off of the Heider Company and be moved to Rock Island with the purchase of the rights and patents as of Jan 1 1916. The Heider facility in Carroll would continue on with its pre-tractor business making wood products (Henry Heider was even awarded a patent for the companies popular coaster wagon (pat 138594)), and eventually making wagons and auger wagons until 1983. In 1983, the remaining Heider family, free of debt, chose to leave the manufacturing business, selling it to the Wellbuilt Co (a division of Scranton Mfg, Scranton, IA). 6).

The Rock Island Plow company, along with the rights to the Heider Name and tractor line, also retained Henry Heider’s services as an engineer for $10,000 a year. Henry would remain with the company until 1922, engineering along the way the Heider D, Heider Plow Lift, the model E 18-35 and the Heider M2 and M1 cultivator tractors. Heider’s last patent for Rock Island was #1,652,358 which Henry applied for in 1922 for a friction driven, fully enclosed tractor with a gear mechanism to allow a field gear and road gear in addition to the standard fiber disk transmission.

*A note about this page. In 2004 John C. Heider created Heidertractors.com. Although John claimed no relation to the tractor Heiders he was a collector and enthusiast on the history and created a website to provide information. That website gave me a good starting point when I began my own research. In 2011 John had an auction where he sold his C, D and 2 row M1 motor cultivator and most of his Heider related material. Dad and I purchased the cultivator tractor and a few more items at the sale. After the sale, John took Heidertractors.com down. I asked him a couple of times via email to keep the site up since it was a valuable tool, but eventually the domain name expired. I went ahead and took over the domain name to point back to this website section to keep the name alive and out of cyber squatter hands. I will probably try to recreate the previous RockIslandPlowCo.com Heider color scheme pages on this new site, but that will be a lower priority. Johns original website can still be partially accessed via the internet archive wayback machine.