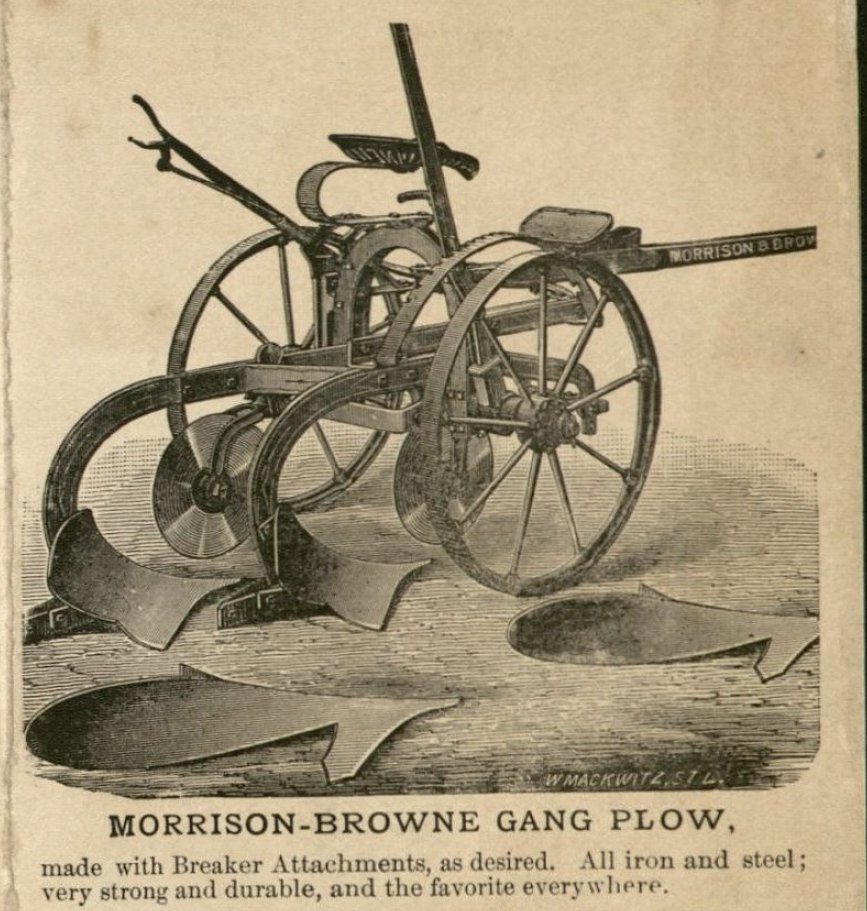 One of the most controversial pieces of history for these companies is the “Browne” sulky and gang plows, and what cast iron artifacts are associated with them. Commonly, Browne items are associated with the Morrison Brothers of FT Madison IA. This stems from two of the 6 versions of the Browne seats having additional lettering of “Morrison Bros” cast above the cutout “Browne Sulky” or “Browne Gang”. Because of this casting, many cast iron collectors have made the association that all Browne artifacts are Morrison Bros related.

I would strongly dispute this; as for a period of nearly a decade, the Browne series was the B.D. Buford flagship product, with frequent advertising depictions and references from trials in trade 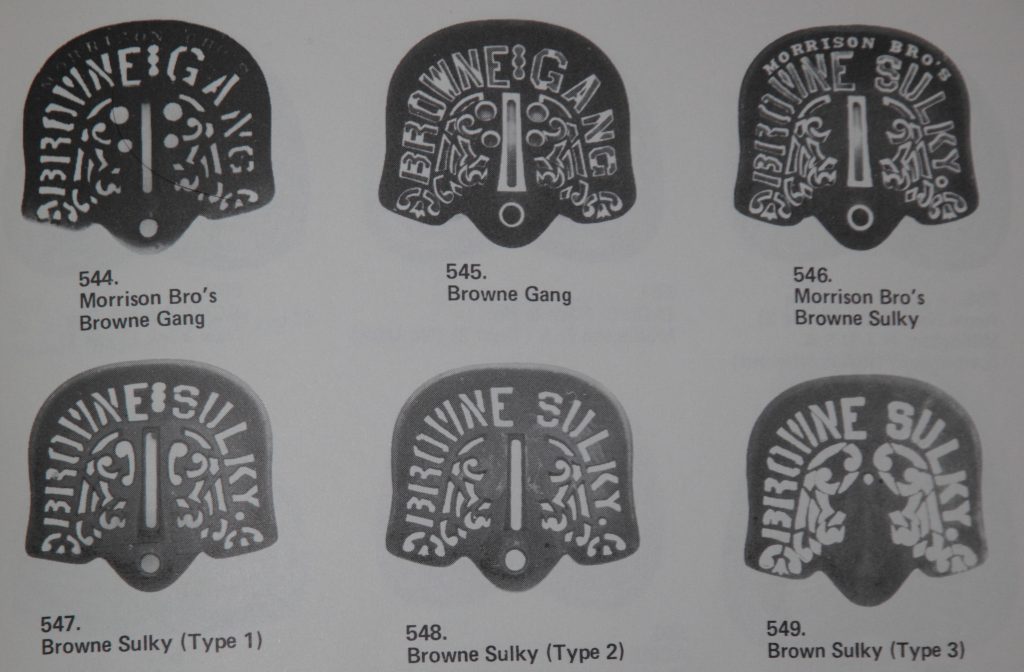 publications and newspapers. These articles give a trail of clues as to William J Browne’s movements from his time as Shop formemand and Inventor of the Buford and Buford’s Browne riding plows, through clues as to why he left Rock Island heading to Ft Madison and later St Paul.  These same sources fail to reference a Brown Sulky by Morrison Bros during the time W.J. Browne was in Rock Island time frame. After years of hunting, I was able to finally find an advertising brochure for the Morrison Browne Sulky that is undated, but is probably from the mid 1880’s that showed two views of the Morrison “Browne” sulky. The design shares a lot of similarity to the Buford “Browne”. However, virtually no mention of it exists in period advertising, while the “Morrison” was mentioned as competing in trials against the ”Browne” in the 1870’s. 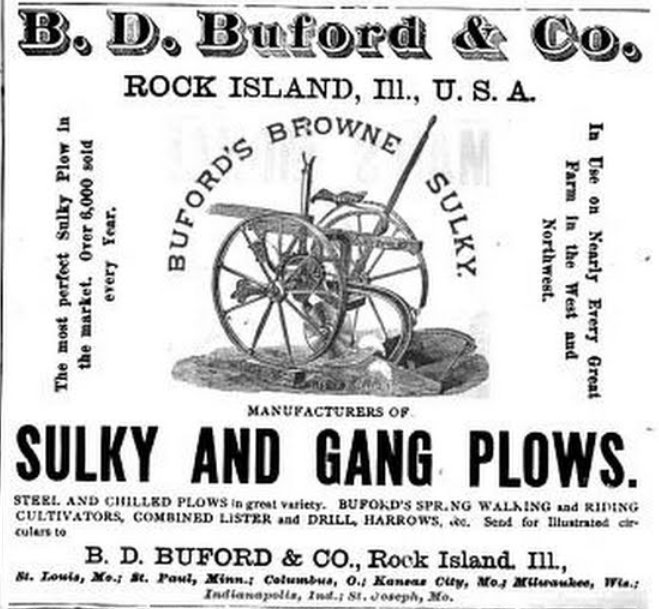 1870’s through the companies re-organization and name change in 1885 to the Rock Island Plow Co, B.D. Buford & Co’s product line seems fairly stable. Walking plows were a staple of the company, but of most significance was the new riding line introduced by 1874. This consisted of the Buford Riding Plow, and the Defiance Riding cultivator. By 1876, the Browne Riding Plow was in full advertisement by Buford. In 1882 Testimony by B.D. Buford before congress on the matter of tariffs claimed $1,000,000 worth of product produced by the company, a staggering sum for the day. The Browne Sulky appears to have been the companies flagship product during this time, featuring prominently in ads, which raises some interesting questions today.

While the Morrison “Browne” is virtually unheard of in advertising, the Buford “Browne” on the other hand, is not an uncommon find in publications of the 1870’s and early 1880’s. Rural New-Yorker of 1881 had an especially interesting ad that included text that 6,000 Browne Sulkys were being sold a year. Another ad from the same time period was advertising for the California market showing coast to coast marketing. The first mention I have found of the Buford Gang Plow appears in May of 1874 in the Rock Island Argus, where its inventor, Mr W J Browne of the Buford Plow Company talked of his design philosophy’s. After the early 1880’s, the Browne Sulky and Gang appears to have been renamed the “Buford” in advertising. 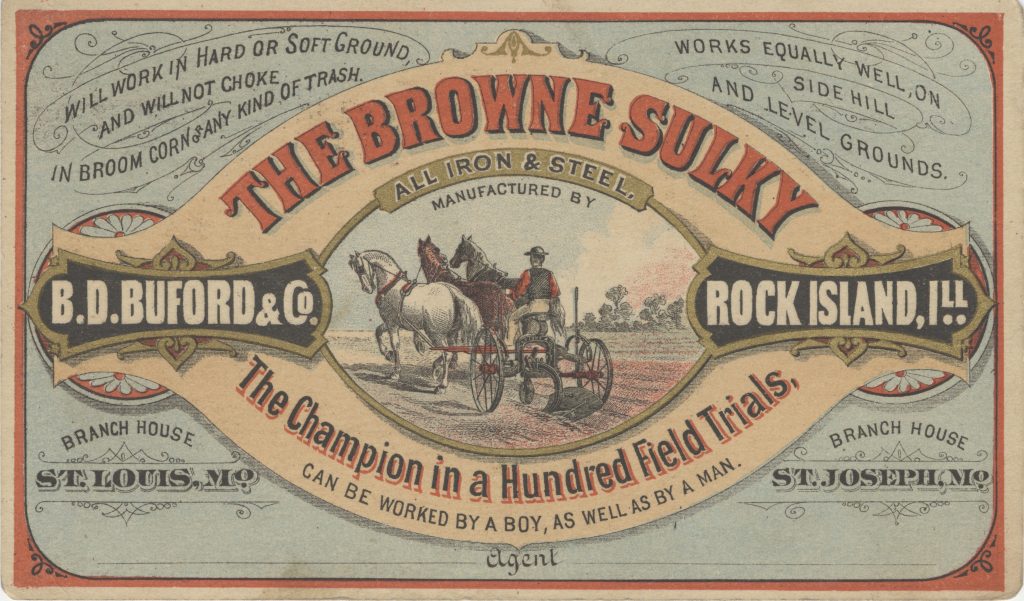 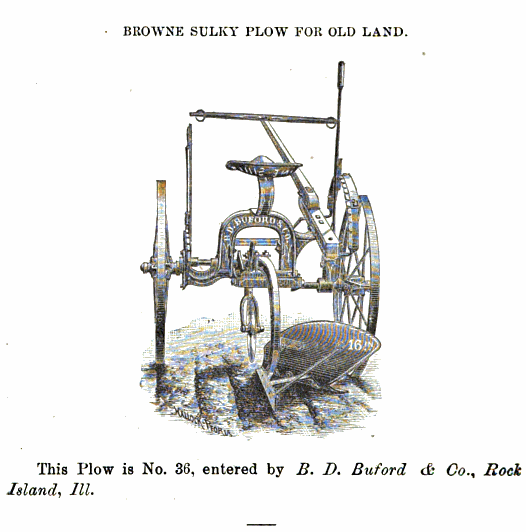 One of the earliest verifiable records of the Browne sulky is the picture of the Browne appearing in the 1877 Missouri Ag report (as did the Defiance and Blackhawk model cultivators), where It competed against the Morrison Brothers “Morrison”. This picture so far is also part of the discussion on where the “Browne” name belongs. In this drawing the seat shows lettering as “NE SUL”, which would indicate “Browne Sulky”. A trade card from slightly later also appears to show the same lettering, however, it is so faint as to be inconclusive.

The earliest parts book I have in my collection is a catalog from 1878, which contains five pages of parts plates. Unfortunately, the plates lack a view of the seats themselves so we lack that critical piece of information. My next earliest parts book is 1900 which leaves a substantial gap; During which the line exploded from walking 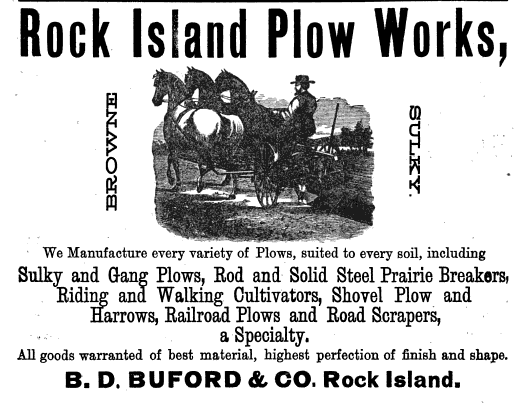 plows, cultivators and two models of riding plows to dozens of implements after the 1885 re-incorporation as the Rock Island Plow Co. (Note the Browne foot rest)

The 1878 Buford catalog also adds to the controversy of the Browne seats, in that the pictures showing the Browne Sulky and Gang are assuredly not the cut out Browne Seats (these same pictures are in the 1881 Buford Catalog Atlas. These pictures appear in advertising from the mid 1870’s through 1885 making them a standard. My guess, and purely a guess lacking printed evidence, is these were produced very early on and represent prototype or first year models. The 1877 Missouri picture seems likely to represent the actual production model. 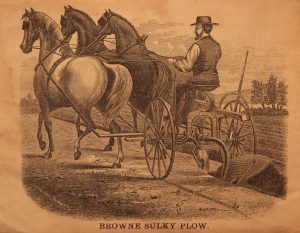 The 1878 catalog, despite not clarifying the seat issue, was an absolute trove as it is the earliest parts plates I have had access to, although they are not a complete parts list. Of key note is it identifies four wrenches so far not identified with Buford and illustrates an unmarked version of the Browne wrench in the B.D. B & Co CP style. These wrenches are not identical in opening size, but do share the same general shape.

For a while now, I and a few others have sought any link between Morrison and Buford. It appears almost certain William Jerome Browne is the common link between Buford and Morrison, however, there are still questions about his specific role with Morrison. According to his 1911 obituary, Browne was born in Wexford county, Ireland, and came to the United States when a young man. Starting in a shop of Deere & Co., Mollne, IL., he was 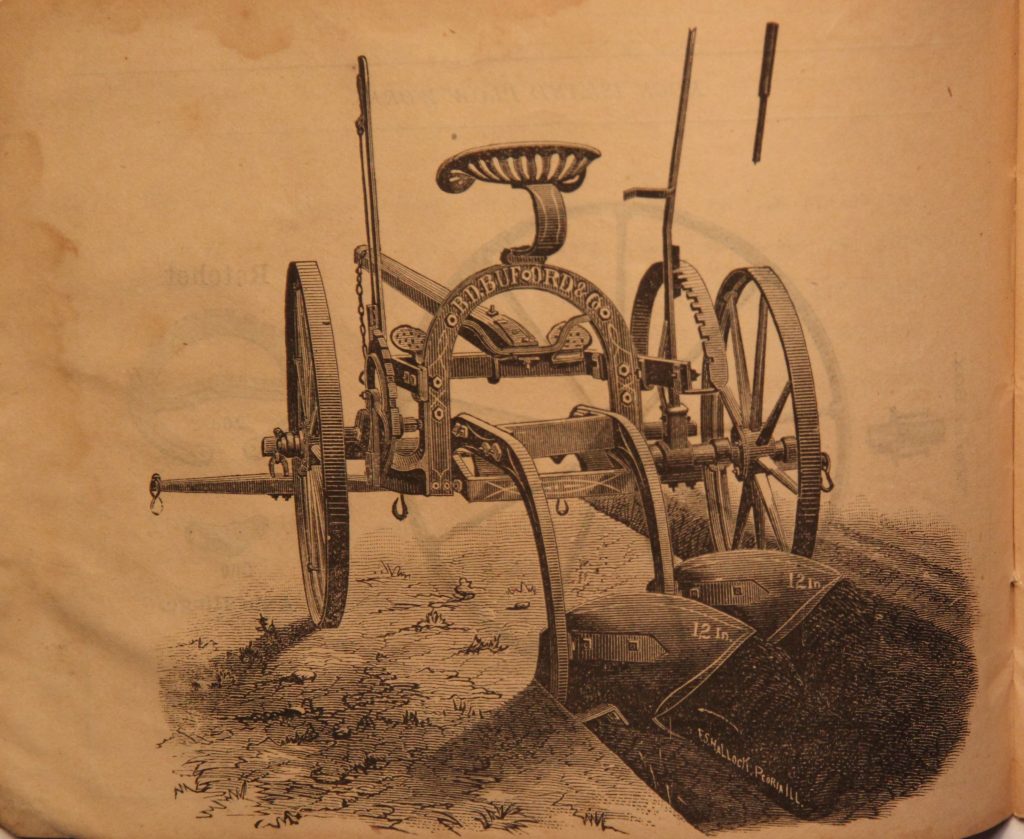 later assistant superintendent with Furst & Bradley, plowmakers of Chicago; The Moline Plow Company and then went to B. D. Buford Co., Rock Island, where he was factory superintendent and manager. A number of newspaper articles from the time talk about Browne as superintendent and his role at the factory and his role as inventor and innovator for the company, and an 1877 article mentions the success of the Browne Sulky in trials, that bears the name of its inventor, William J Browne.

The likely reason for Browne leaving Rock Island though is revealed in Feb 1881 article in the Moline Review-Dispatch:

The motion for a new trial in the case
oi W J. Browne vs L M. Buford, assault
with a deadly weapon, was overruled
by Judge Glenn, and Major Buford was
lined $5000 and costs.

Oddly, I have no other records of this trial and case, but certainly a fight involving a weapon between the shop foreman and one of the Buford family would be a cause for the foreman to seek new employment.  Although I find no specific mention so far of Browne leaving Rock Island and moving to Fort Madison IA,  A December 1882 Argus paper mentions Wm J Browne, Superintendent at the Ft Madison IA Plow Works as being in town, so by then it appears he had found employment.

In 1885 Browne patented cultivator improvements and a wheel 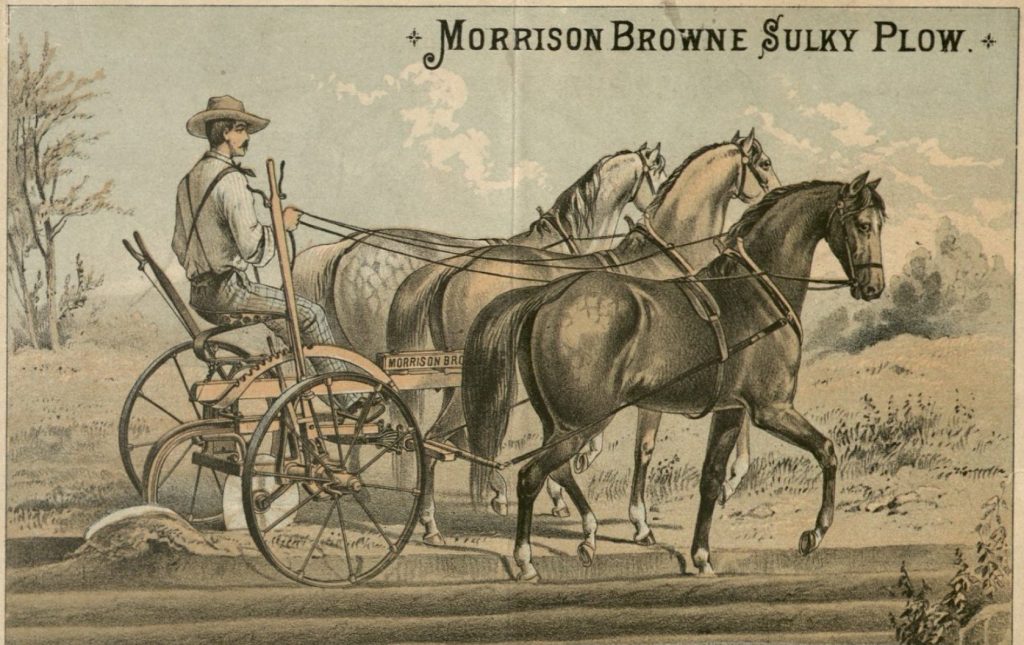 gang plow while being in Ft Madison. Oddly, the 1885 plow patent was advertised in the Rock Island Argus as belonging to Buford Plows Superintendent, W J Browne; the wording sounding as if he was currently employed there.

Brownes obituary makes no mention of his time in Fort Madison, nor is there mention of Morrison Mfg. Browne moved to Minnesota in around 1889 where he took a role as superintendent for the St Paul Plow Works. As part of the agreement he brought his patents with him in return for a 5 year contract and stock which he could redeem at the end of the 5 years. In 1894, Browne sued the St Paul Plow works for refusing to honer the agreement and cash in his shares or renew his contract. In addition, they continued to use his patents. During this time, he added more plow patents to his name. Although it appears Browne won an initial judgment for $3000, it may have been vacated. At the time of his death in 1911, he was once again working for Deere.

Although there are versions of the “Browne” seat with a 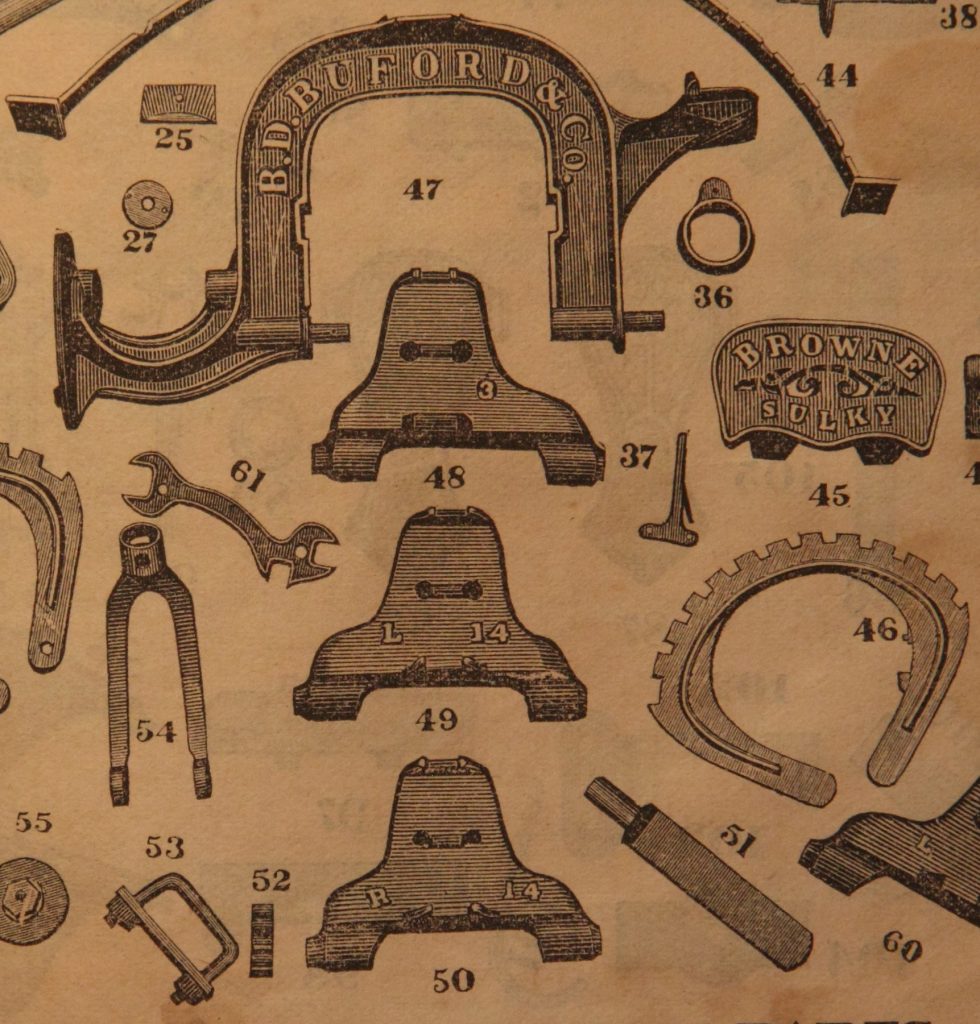 nd without Morrison markings, the “Browne sulky” wrenches have no such distinguishing features. I believe that the Browne wrench should fit firmly in the Buford line. Besides the commonality of it which would be in line with the more prevalent Buford advertising and production, and its likely era of production, the 1878 catalog shows a wrench that is markedly similar to the Browne.

ual Browne wrench to my eye does appear to match the openings of the illustrated wrench, more closely than the BDB & Co version commonly associated with Buford. Dan Chopiak did point me to two unmarked variants of this style o wrench, a 9.5 inch and 10 inch variant, both believed to be tied to Deere which also used a variety of this style of wrench. The 10 inch, to my eye bears a strong resemblance to the pictured unmarked wrench, while the smaller one does not. However, when the BDB & Co, the Browne and the unmarked 10 inch are compared, you can see distinct differences. Again, the Browne and the catalog version appear to be the closest match. The 61 catalog entry appears to be a tracking number, and they do not seem to be casting numbers. These numbers were not carried over into the 1900 list. Although it is possible the unmarked 10 inch is a Buford wrench, my personal feeling at this time is that it is not, and the wrench shown in the catalog is in fact the Browne wrench.