The Rock Island F was the longest running line of the Rock Island tractors, with multiple variants. Introduced in 1927 the F was the highest horse power and most modern tractor Rock Island produced at the time. The F was initially labeled just the 18-35 but was shortly thereafter advertised as the F 18-35. The 1927 Nebraska Test 144 rated out at 30-36 on distillate making it an underrated tractor. Although the G2 seems to be more common in preservation, the F/ FA now appears to have been produced in far greater numbers with at least 2884 produced, and probably over 3000.

Although the F 18-35 designation was kept until 1935, it did undergo some internal changes including the switch from the Buda YR to the YRA engine around 1928 – 1929.  There is evidence from third party parts manuals that at some point the Buda YTU engine may also have been used but no mention is found in the 1938 Case/Rock Island parts list. This was likely an internal BUDA variant on the same engine, meaning parts may be mostly interchangeable. In 1930 a special variant of the F was released in Canada called the Canadian Special 18-35 and 24-45. Both tractors utilized a Waukesha DSR engine.

The initial release version of the Rock Island 18-35 had enough distinct features I have a A dedicated look at the early 27 18-35 Here. These first 250 18-35’s had shorter fenders, an external pulley brake, a Heider 15-27 style United centrifugal aircleaner with no air stack and a number of other smaller differences. These it now appears were all painted Heider green. 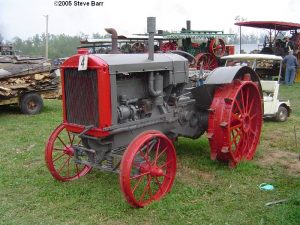 After the first 250 F’s were built, the fenders were changed to the longer style common to all other F’s, the oil bath air cleaner and stack were added and the pulley brake was moved to the inside of the belt pulley. These tractors all had a 27 prefix to the serial number and in 1928 this was changed to a 28. Through mid 1928 the F used a throttle and magneto retard cable, but sometime in 1928 this was changed to a rod. It is debatable at what point the Heider green was abandoned in favor of battleship gray, but likely mid to late 1927

In 1929 the F saw a major design change that would split it into two models, the F and the FA. The transmission housing was lengthened and new gearing was introduced for both models. One of the chief complaints about the model F was its fast gearing, something many farmers were not comfortable with; The FA was the response to this with a slower gearing to reduce ground speed. There is no serial number distinction between the F and the FA or the number of each variant produced. 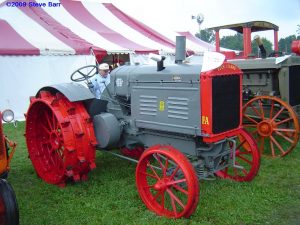 At least some F’s were sold with an all red paint scheme (mistakenly attributed to Canadian Specials). According to Mark Paskevich who owns a 1928 F that was originally painted in this scheme, this was a Canadian Paint scheme from Waterloo, Rock Islands Canadian distributor.  I so far have no direct evidence in the form of literature or advertising to corroborate this, Waterloo materials I so far have seen all show the standard Grey and Red. So far, I have not identified any differences in parts either.

The F and FA models were both built until officially 1935, however, some may have been produced in 1936 from leftover parts. The intention in 1935 was to replace the F with the H22, but by that time the company was in a death spiral and only a handfull of H22’s were built.

Starting with the 1929 parts list, at 29000 the transmission case changed from the same parts number as the G2 to its own part number. Coinciding with that, in 1929 a new version of the F was introduced, the FA (serial numbers for an FA will begin FA29xxxx). Both tractors continued to be manufactured until 1935. The FA had different gearing (the gearing for the F also changed at serial 290000)

at 29000 the transmission case changed from the same parts number as the G2 to its own part number. Coinciding with that, in 1929 a new version of the F was introduced, the FA. Both tractors continued to be manufactured until 1935. The FA had different gearing from the standard F (the gearing for the F also changed at serial 290000)

at 290496 the 46-C magneto was replaced with the 46-T, possibly around the same time the M-2 Carbarator was replaced by the SF-3, though no serial number break is given in the SF-3 section.

I have an ongoing restoration log for FA HERE. Eventually it will get its own webpage.